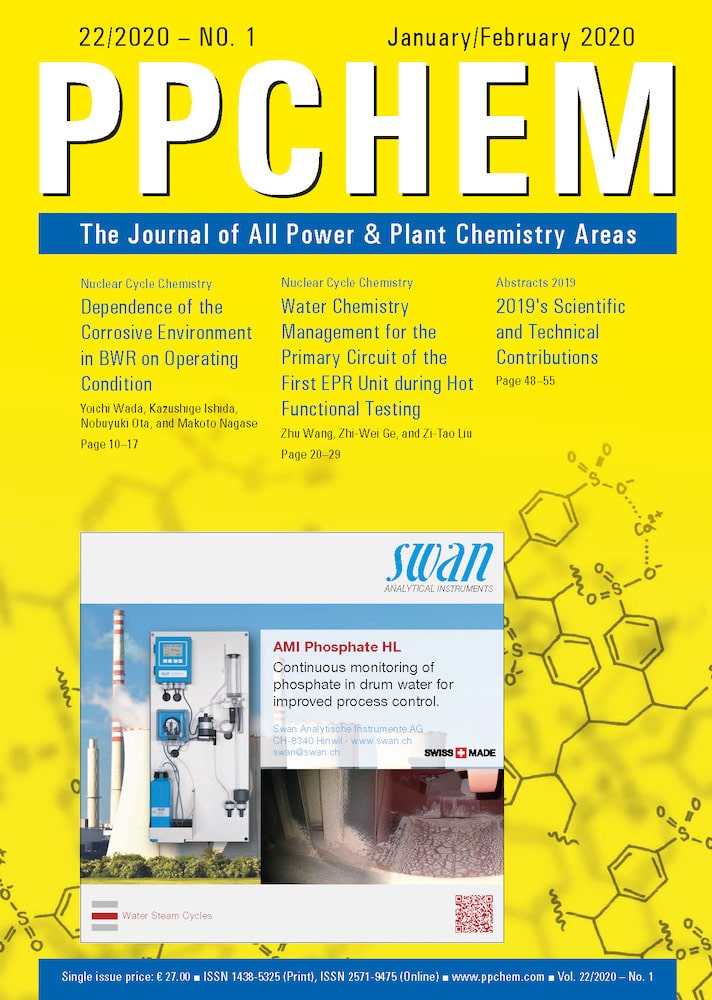 Dependence of the Corrosive Environment in BWRs on Operating Conditions

The effects of core management in a boiling water reactor (BWR) on radiolytic oxygen and hydrogen peroxide concentrations in the reactor water have been studied based on a radiolysis model. An increase in core flow promoted radiolysis of water in the core region since the amount of water present in the core region became larger and mass transfer from water to steam slowed down. Also, a decrease in core peripheral power at the end of the cycle reduced the effectiveness of hydrogen water chemistry (HWC) applied to reduce radiolytic oxygen and hydrogen peroxide and the subsequent electrochemical corrosion potential for mitigation of stress corrosion cracking since the downcomer dose rate became weaker with operation. These caused an increase in the sum of the oxygen and hydrogen peroxide concentrations at the same hydrogen injection rates and the effectiveness of HWC decreased. The effectiveness of noble metal chemical addition was not affected by changes in operating conditions at a 0.5 mg · kg–1 hydrogen injection rate.

The paper describes in detail the water chemistry control during the hot functional testing (HFT) of the first European pressurized reactor (EPR) unit worldwide, and focuses on the water chemistry control during passivation treatment of the component surfaces in the primary circuit with hydrogen injection, higher pH300°C and impurity control. Two identical surveillance coupons made of Inconel 690 TT steam generator (SG) tube samples were placed in the reactor pressure vessel (RPV) to evaluate the final passivation results. Water chemistry data and metallographic analysis results show that an excellent protective film was formed on the surface of the tubes, which reduces the corrosion rate of materials and the release of corrosion products, thereby also reducing radiation source terms during commercial operation of the unit. In addition, a brief comparison of the passivation film and passivation process between two types of the 3rd generation pressurized water reactors (PWRs), especially the hydrogen injection and zinc injection technologies, was made. The benefit of the passivation process during HFT for the dose rate is preliminary, and the dose rate reduction effectiveness also depends on the applied water chemistry control methods during future power operation of the unit.