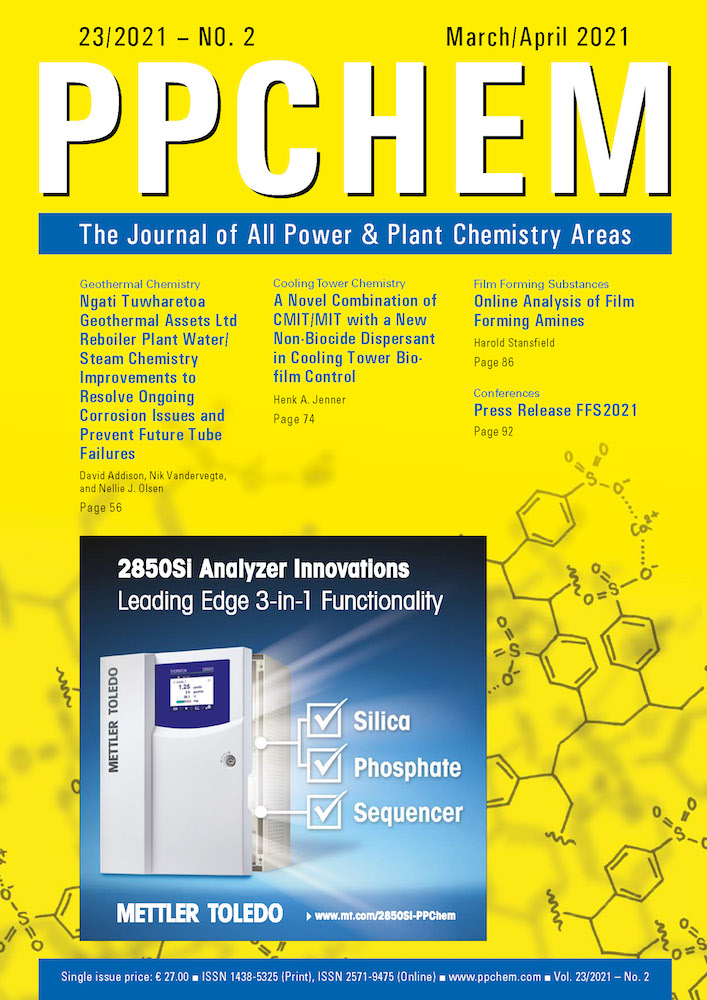 Since its commissioning in 2010, the Ngati Tuwharetoa Geothermal Assets Ltd Kawerau reboiler plant has suffered from major corrosion and plant failure issues. Corrosion-related failures which occurred due to water/steam chemistry issues and interactions with plant materials have led to premature complete replacement of the tube bundles.

In 2018 a major root cause analysis was undertaken into the failures that included a detailed chemical and metallurgical investigation and successfully identified the failure mechanisms. A number of simple chemical treatment changes, including hydrogen sulfide neutralisation, pH correction and the application of corrosion inhibiting film forming substances, were carried out to successfully mitigate ongoing corrosion of the plant and to significantly extend asset life.

Microbial biofilm communities are a significant problem in recirculating cooling water systems resulting in reduced heat transfer efficiency, and the risk of microbial influenced corrosion (MIC) and Legionella infection of operators. Most biocides are generally only effective in the control of microorganisms when in the water phase. A new dispersant was tested that is able to remove biofilms from their substrate, releasing the biofilm community into the water phase. This study investigated how the effectiveness of (chloro)methylisothiazolinone/methylisothiazolinone (CMIT/MIT) (non-oxidizing biocide) in a heavily fouled scale cooling tower model with condenser tubes could be improved by the new dispersant. Dosing tests with CMIT/MIT separately and combined with the new dispersant were performed with different CMIT/MIT concentrations. Microbial activity in both water samples and biofilm samples was measured by the analysis of adenosine triphosphate (ATP). Additionally, the biofilm mass in the transparent condenser tubes was visually inspected by photos. The new dispersant was shown to be effective in loosening the biofilm and the biocidal efficacy of CMIT/MIT was greatly increased due to this combination.

Waltron has developed an online colorimeter for online analysis of film forming amines
(FFA). The design basis and development process are discussed. Data from beta testing and two working case studies are presented. The analyzer can monitor FFA-based products in a working range of 0–1 000 µg ⋅ L–1, with an accuracy of ± 2 % of full scale or ± 5 µg ⋅ L–1, with a lower detection limit of < 5 µg ⋅ L–1 as FFA.

The IAPWS Fourth International Conference on Film Forming Substances (FFS2021) was held on the 23rd and 25th March 2021 as a virtual event chaired by Barry Dooley of Structural Integrity Associates. FFS2021 was a unique conference on a narrow topic in cycle chemistry control of power plants and steam generating facilities. In 2021 the conference attracted a record number of 130 participants from 28 countries which included 41 plant operators/users and 27 people from the Film Forming Substances chemical suppliers.

The FFS conferences are developed and supported by the International Association for the Properties of Water and Steam (IAPWS), and the FFS2021 was organized by PPCHEM AG, publisher of the PPCHEM® Journal. Three sponsors supported FFS2021: Trace Analysis, Fineamin Swiss Water-Treatment Chemicals and Swan Analytical Instruments.

GSAPWS
German-Swiss Association for the Properties of Water and Steam