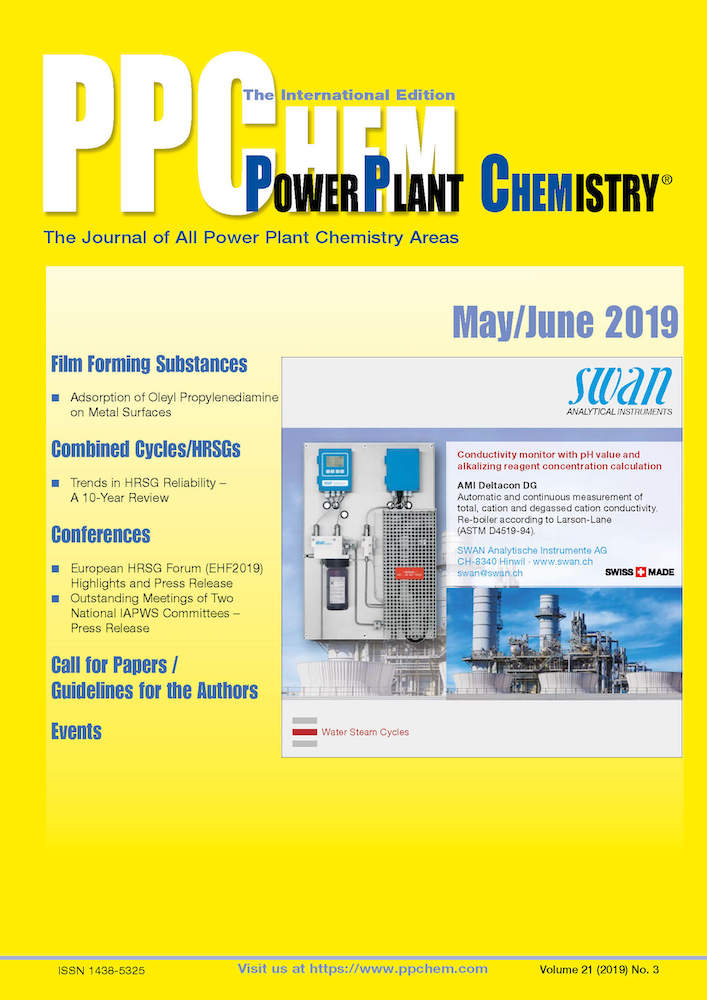 Operation of water/steam cycles is threatened by corrosion unless proper conditioning measures are taken. As an alternative to traditional cycle chemistry, film forming amines (FFAs) are becoming increasingly important.

It is essential to understand the adsorption behavior of FFAs. This paper presents the results of an extensive study on the adsorption characteristics of FFAs on metal surfaces: stainless steel, carbon steel, copper, and aluminum alloys. Moreover, to reflect the plant conditions in a more realistic way, experiments with an iron oxide (‘magnetite’) layer were performed.

Adsorption trials were carried out with different film former concentrations and at different temperatures in a custom-made polytetrafluoroethylene vessel. The focus of this research was mainly on the use of oleyl propylenediamine (OLDA), one important FFA, which is included in the Technical Guidance Document issued by the International Association for the Properties of Water and Steam [1]. Nevertheless, other FFAs (homologues of OLDA) were also tested for comparison.

The adsorption isotherms were described with the Henry adsorption model due to the limited number of experiments and for the sake of simplicity. Adsorption of FFA accelerates with temperature and follows first order kinetics. Moreover, surface coverage by FFA was determined by mass balance, which is influenced by the nature of the metal and the FFA used.

For selected metals the surface coverage data of FFAs were compared to polarization resistance data obtained from electrochemical impedance spectroscopy. These data showed that the same degree of corrosion protection is achieved with lower amounts of OLDA compared to oleylamine (OLA).

The time dependence of surface coverage by OLDA showed the same tendency as the polarization resistance data on steel and aluminum.

By 2008 the authors had conducted assessment surveys at a small number of combined cycle/heat recovery steam generator (HRSG) plants in the areas of cycle chemistry, flowaccelerated corrosion (FAC), and thermal transients. The results clearly showed some important trends on why the major failure/damage events occurred on these plants. In the interim period the authors have extended the number of plants worldwide to 90 to allow a ten-year review of combined cycle/HRSG reliability. There has been a remarkable increase in knowledge and understanding of the main drivers of damage/failure, and in combination with the tools developed for the assessments, this paper now includes clear direction on how to address the reliability issues retroactively and how to avoid them proactively. The major cycle chemistry influenced issues are: HRSG Tube Failures due to FAC, under-deposit corrosion, deposits in high pressure (HP) evaporators, and failure in the phase-transition zone of the steam turbine. The main thermal transient aspects of thermal and corrosion fatigue relate to inappropriate/inadequate operation and maintenance of attemperators, poor drain control of superheaters and reheaters, HP drum ramp rates, and forced cooling. Another emerging issue is severe erosion of bypass pressure control valves. The paper discusses each and provides directions by which plants can avoid the issues in the future.

A hugely successful sixth annual meeting of EHF was held on the 14th – 16th May 2019 in Athens, Greece chaired by Barry Dooley of Structural Integrity. EHF2019 attracted 76 participants from 17 countries. EHF is supported by the International Association for the Properties of Water and Steam (IAPWS) and is held in association with the Australasian Boiler and HRSG Users Group (ABHUG) and the US HRSG Forum (HF).