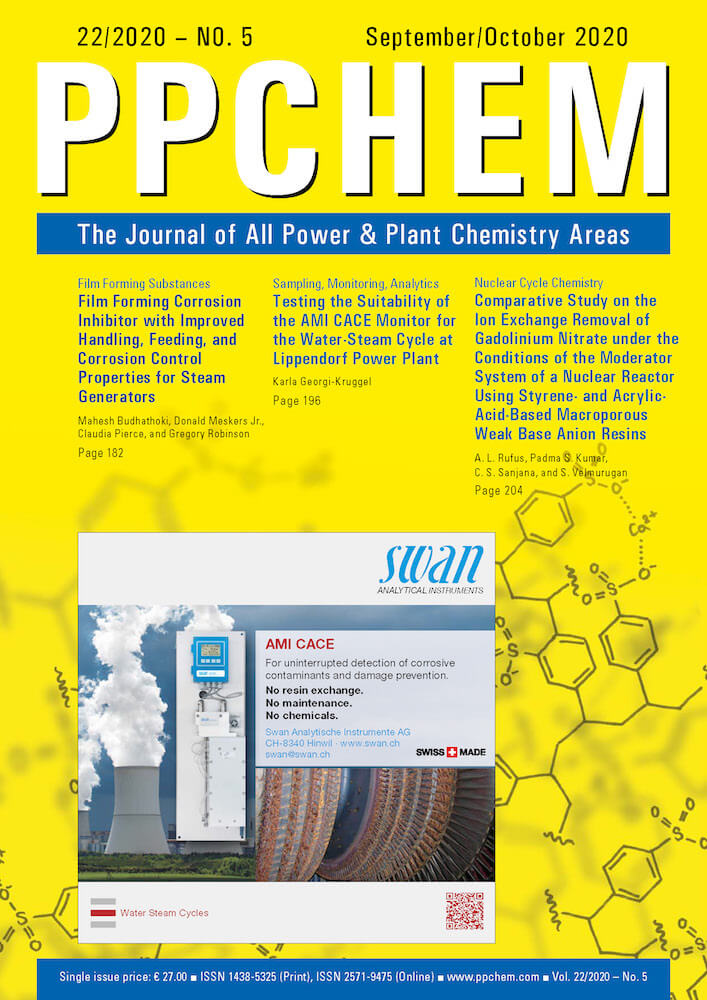 Film forming amine (FFA) products containing octadecylamine (ODA) or oleyl propylenediamine (OLDA) are known to provide excellent corrosion protection to the alloys used in the steam-water cycle of power plants. However, product formulations based on these filming amines exhibit poor water solubility, which often hinders successful application due to formulation stability, feeding, and handling. In this work, the water solubility of an OLDA-based FFA product is significantly improved with the addition of a co-surfactant and its efficacy as a corrosion inhibitor in steam generators is evaluated. Research boiler experiments indicate that the vapor-liquid distribution ratio of OLDA decreases by enhancing its water solubility. Also, the conductivity after cation exchange (CACE) measured in steam suggests that under normal boiler operation conditions, unlike neutralizing amines or co-solvents, the added co-surfactant does not contribute to the CACE in steam. Furthermore, electrochemical and corrosion testing indicates that the water-soluble FFA product can effectively inhibit corrosion, which is attributed to its ability to form a hydrophobic film on metal surfaces, as suggested by the contact angle measurements.

In the period from January 06, 2020, to June 30, 2020, an analyzer for the automatic and continuous determination of conductivity before and after a cation exchanger with electro-deionization was tested at the Lippendorf Power Plant of Lausitz Energie Kraftwerke AG, Germany.

This report describes the setup and outcome of the trial. In summary, the proof of suitability of the analyzer for the monitoring of the water-steam cycle and the control of the conditioning agent quantities was positively demonstrated for all tested measuring points.

The fission reaction in a nuclear reactor is regulated by adding “neutron poison” to the system. Gadolinium has a high neutron absorption cross section and hence is used for this purpose in the form of aqueous solution of gadolinium nitrate. After its intended use, the neutron poison is removed from the system using mixed-bed (MB) ion exchange resin columns. A comparative study between the styrene- and acrylic-acid-based macroporous weak base anion (MWBA) resins in the MB column was carried out. Based on the parameters evaluated, which include (i) extent of utilization of the ion exchange capacity, (ii) precipitation of gadolinium in the ion exchange column, (iii) pressure drop across the column and (iv) radiation stability, the use of acrylic-acid-based resin in the MB ion exchange column was found to be good. The ion exchange capacity for acrylic-acid-based MWBA resin was higher (2.6 mEq ∙ mL–1 of resin as against 2.0 mEq ∙ mL–1 for styrene-based MWBA resin), 65 % utilization capacity as against 50 % for styrene-based MWBA resin, less precipitation of gadolinium (0.001 % as against 0.004 %), a favorable pressure drop and better retention of ion exchange capacity on irradiation.